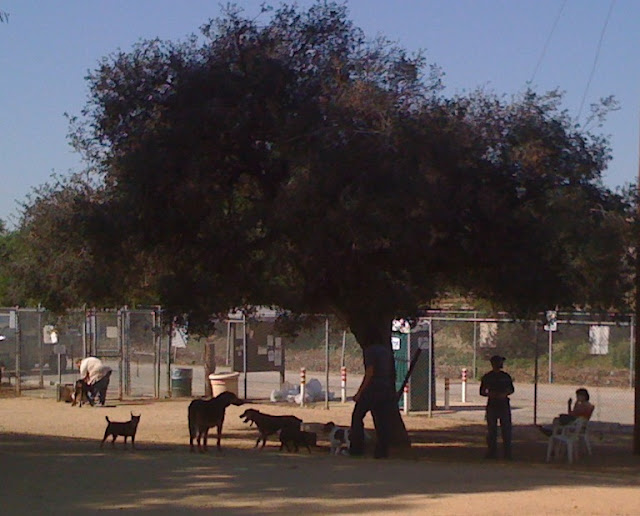 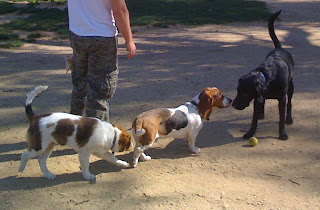 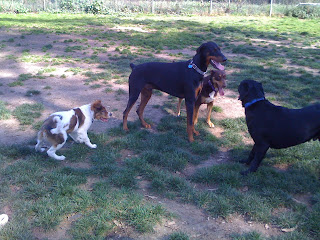 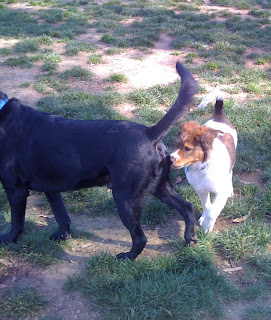 My People cornered me in the kitchen after I'd had a delightful morning of random shoe snatching and playing keep-away with a decorative pillow. The little pillow is just lovely, made with green shantung silk and covered with teeny-tiny bells, each sewn on by the skinny eight year old hands of some unfortunate child in Calcutta. For a moment I thought perhaps I'd pushed it too far by running the pillow out into the yard and making The Lady scramble up the embankment after me to get it back. I thought it was pretty funny but she was swearing like a sailor as she dug her freshly manicured bare toes into the dirt and got tangled up under the prehistoric sized sego palm. It seemed like a good idea at the time, but now I'm having second thoughts. Later, when I believed it had blown over and I was in the clear, I was caught sniffling around the cupboard where they hide my snacks and treats. The Lady snuck up behind me on tippy-toes and clamped the leash to my collar. She said they had a big surprise for me and I had to come with them into the car. My heart sank into my empty stomach. What is a surprise? Does it have anything to do with Evil Steve and Wicked Wanda stir-frying me for a Saint Bernard dinner? I think I am in even bigger trouble about the pillow than I thought. It turns out, I'm not in trouble at all! (Well, maybe a little bit.) Instead of being deported, we drive only a little way down the road to an enclosed patch of dirt with a few trees and some benches. It is called a Dog Park and it is positively infested with dogs. I was so excited I almost jumped from The Lady's lap and straight through the windshield when I saw all of the different dogs. Big ones! Little ones! Barky ones! Old ones! Black ones! Brown ones! Fancy ones! Happy ones! The second we got out of the car and through the gates, I was off like a rocket, running at top speed from side to side, from dog to dog. It was the most fun I've ever had, even more fun than ice cubes or the Visitor Bell. I chased after the yellow lab, played with the big black lab, sniffed the chow chow, stepped over the little boston terrier. The only one who growled at me was the miniature pincher who was just all silliness and absolutely no real bite, and my favorite was Max the enormous doberman. Max played with me the most and it was so much fun. Every single person there said I was the cutest dog at the park and wanted to pet my fuzzy fur. Of course I let them. (You know.... I don't think I peed when I met any of the people at the dog park. How interesting...) We only stayed for about 45 minutes, but I was starting to get awfully tired and it was time to go home for my lunch. A perfect random Wednesday.
Posted by Katurah C. Rogers at 2:55 PM