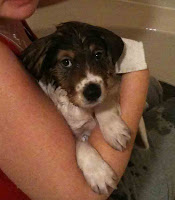 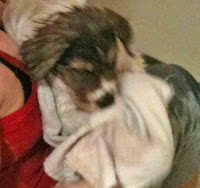 Today is Valentine’s Day, and Oliver’s birthday. I’m getting lots of extra hugs but I think it has more to do with Oliver than with me. Last year they had a party for the occasion, but this year everyone was sad and the biggest event of the day was a bath. Well actually a shower. I was trying to avoid the tub and was hoping to hide in this big glass closet on the other side of the room, hoping The Lady would forgot about giving me a bath. Instead she looked over at me in the glass closet and said, "Well, Ok. If you're game, I'm game." Then she took off all of her clothes and got in the glass closet with me, COMPLETELY NAKED. I'm not a prude or anything, but it was MOST disconcerting, especially since she spends most of her time wearing LOTS of sweaters and socks and hats owing to the chilly February weather. But that was just the beginning of the weirdness. She twisted her naked hand around a few knobs and levers on the wall and water started pouring all over me, just like it did outside when I was potty training during the monsoon. Except this time it was hot water and I didn't get to stand under a patio umbrella. The glass closet was too small to escape. Believe me I tried, but I was locked inside. If that automatic rain feature wasn't bad enough, she poured fancy designer shampoo all over me and rubbed me until I was a giant ball of suds. The shampoo is called GoochiPoochi and it is made by her friend Alan, who used to be named Keith. He is a famous hair stylist who loves dogs and thinks they should have hair as pretty as his celebrity clients. The shampoo itself was nice, but I didn't like the shower at all, especially when she used a separate hand nozzle that sprayed me at close range. Water got in my ears and made me deaf for hours. The worst was that she made me sit there in a puddle with detangler and conditioner slathered all over my fur while she shampooed her own hair and then proceeded to shave her legs. Can you believe it? I puckered up my little lips and howled as loud as I could for as long as I could, but she just laughed at me and kept remarking on how many freckles I have. It was just awful.
I'm not even going to discuss the hair dryer. I'm exhausted.
Posted by Katurah C. Rogers at 5:01 PM