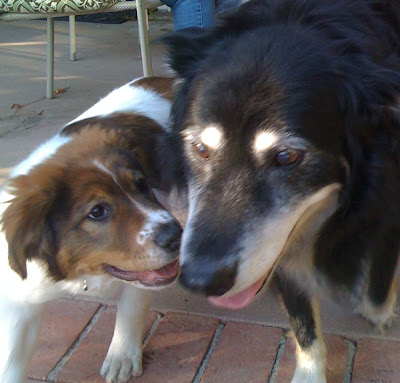 Because I have had more shots, I can have a doggie visitor, so The Man invited Earl to come over for a play date and bring His Person, Elizabeth. Well, it wasn’t really a play date as much as it was an exercise in tolerance on the part of Earl. I LOVE Earl. He is an elderly Australian Shepherd mix (like me!) with cataracts and hip problems, and a luxurious plume of a swoopy tail. One day I hope to have a tail as beautiful as Earl’s. I was waiting for Earl on the front lawn while The Lady was cutting some camellia flowers for a bouquet. When he came around the hedge, I was so excited I couldn’t stand it and peed a little in the grass, but I don’t think anyone noticed. ("I noticed."-note from The Lady). We all went through the garden gate and shut the door behind us, making sure we were safe. For an old guy he was pretty happy about being let off leash in our yard, and roamed all over exploring everything, sniffing all the raccoons and skunks and possums that congregate by the watering hole (the pool) every night, sniffing all the pets that have lived here before me, sniffing the neighborhood stray cats that sleep in the planters because this yard is safe from the coyotes that will eat them, and of course Earl was sniffing all the smells that I have carefully placed all over the yard, to let everyone know I belong here. I danced circles around Earl as I showed him the side of the house where the spare flowerpots are kept to collect rainwater and leaves to make the most delicious soup. Then I persuaded him to examine the Badlands crawl space under The Lady’s pool house where nothing grows because that area has never seen the light of day. I think Earl especially liked the embankment over the pool deck where My People put lots of Mexican Feather Grass and big rocks with Lemon Thyme tucked in the corners to make it smell nice in the sun. Elizabeth was a little worried Earl might lose his footing on all the rocks and roots, especially since he can’t see very well anymore, but he did just fine. The only problem he encountered was getting stuck backwards between a bench and fence in a space too small to turn around to get out. The Lady helped him by lifting his front paws on the bench and rotating him around so he could walk out frontways. Earl gave her a grateful look with deep dark eyes framed by his Kabuki white eyebrows. Everyone said I was nice because I shared my enormous water dish and offered my toys, even the Fishing Game. After a while Earl had had about enough of me being so excited to finally have a friend, and everyone scolded me when I bit his tail a little. It is so hard to resist, so feathery and soft, and I only bit him a little. I hope Earl comes over to visit again soon. Next time I’ll show him how to rip up the grape fines and run as fast a possible with them through the yard.
Posted by Katurah C. Rogers at 5:02 PM