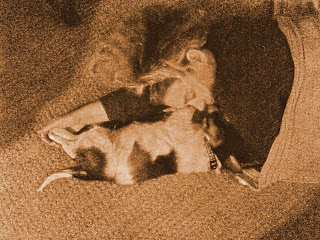 Because of starting off so terribly ill, with such nasty gastrointestinal distress, and My People suspecting I am younger than they were told (I am! I am! I am!) they set their alarms and faithfully took me outside to potty every single hour, every single night. Then they moved it to 1 hour and 15 minutes, then 1 hour and 30 minutes, and so on and so forth. Eventually it settled into a routine of The Man taking me out at midnight, The Lady taking me out sometime in the middle of the night around 4:00, and then The Man taking me for my first morning walk at 7:30. When this became the routine, I felt much better, was a few weeks older, and really didn’t like to be dragged out into the cold yard from my nice warm crate (CAGE!) right when I was hitting my REM cycle. It was bad enough that it was cold, but some sort of extreme weather monsoon had started in Los Angeles which made it particularly unpleasant. I went along with it for weeks, but I was starting to get angry. Instead of holding it in, I decided to express myself and started growling a little. It seemed to have some sort of effect, to I growled more. Eventually I got so loud I woke The Man up with my impressive vocal styling. I thought she would stop making me go outside, but she seems to think it was for my own good and persisted with the schedule. Finally, finally finally she agreed to let me sleep all night through, but the first night displayed gale force winds, sheets of pelting rain and hurricane conditions outside. I heard thunder for the first time, which was very scary, and some loud dripping noise was echoing from someplace outside that sounded like someone in high heels was walking down the hillside steps next to the bedroom door, and I imagined it was Wicked Wanda, coming to get me with Assassin and Accomplice. About 3:30 in the morning I heard a terrible roaring noise which turned out to be a violent mudslide in which most of the California hillside fell into the street. Three houses across the street have red tags and are condemned. My first night of sleeping all the way through wasn’t very successful and I spent much of the night growling and yipping and wiggling around in my house/cage. (I’m not much of a whiner.) I guess it wasn’t very nice for The Lady either, since she spent most of the night curled up on the floor outside my door in a pile of blankets and pillows so she could keep a few fingers in my fur for reassurance. We’ll do better tomorrow night.
Posted by Katurah C. Rogers at 4:52 PM